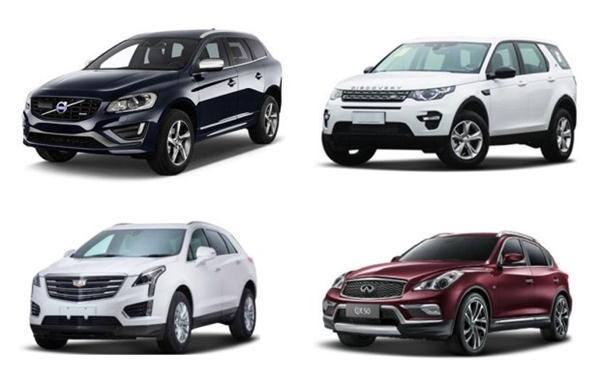 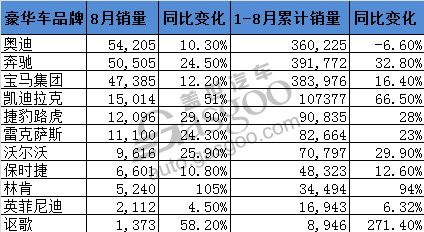 Audi sales in China (including Hong Kong) achieved an increase of 10.3% to 54,205 vehicles, which not only set a record for Audi's sales in China so far this year, but also set Audi's August sales record in China. In August, FAW-Volkswagen Audi sold 54,005 vehicles, and domestic models accounted for over 90% of the total, reaching 49,494 vehicles. From the models, Audi A4L sales rose 39.5% last month, reaching 10,731 units; Audi A6L contributed MVP-level performance, leading the luxury C-Class segment, which sold 13,069 units in August, up 12% year-on-year. Thanks to the growth over the past three months, Audi's total sales in China this year were 360,225 units, and the decline has been significantly reduced. Audi CEO Rupert Stadler pointed out that China is once again the biggest driver of sales growth for Audi, and it will be able to achieve successful sales performance in the third quarter of this year.

In the sales of Mercedes-Benzâ€™s three major regions, in August the Asia-Pacific region not only surpassed the other two major regions in terms of overall sales, but also the largest increase. Last month, Mercedes-Benz sold 73,264 vehicles in the region, a year-on-year increase of 18.9% from August last year. Among them, Mercedes-Benz sales in China in August even set a new record, delivery of 50,505 new cars, a year-on-year increase of 24.5%. As of the end of August, Mercedes-Benz sold 391,772 vehicles in China, up 32.8% from the same period of last year. The new S-class landing in the Chinese market in September is expected to further enhance its sales performance in China.

The Asian market is still the main driving force for BMW Group's sales growth. The Chinese market continues to perform better. Sales of BMW Group (including BMW brand and Mini) in the Chinese market increased by 12.2%. In August, a total of 47,385 units were sold. In the first eight months of this year, a total of 383,976 units were sold, an increase of 16.4% over the same period of last year.

Cadillac sold a total of 15,014 vehicles in August. Its XT5 luxury SUV, the best-selling model, sold nearly 5,400 units, an increase of 73% compared to the same period last year. The mild hybrid version was released at the end of August and is expected to contribute to the further growth of sales. The ATS-L luxury sports sedan sold more than 5,200 vehicles, a year-on-year increase of 63%. CT6 luxury flagship sales rose 81% year-on-year. Mr. Andris, Vice President of Cadillac Global and Head of Marketing of SAIC General Motors Cadillac, said, â€œWith its strong product lineup, unique brand concept and first-class user experience, Cadillac has accumulated a good competitive advantage in the luxury car market in China. The goal is to become a top-level camp for domestic luxury brands.

Lexus announced the latest sales figures in China. In August 2017, the sales volume reached 11,100 units, setting a record high for sales in China in a single month. From January to August, Lexus' sales in China totaled 82,664 vehicles, an increase of 23% year-on-year. The increase in Lexus' sales volume was attributed to the outstanding market performance of its three main models: ES, NX and RX. Among them, the medium and large sedan ES became Lexusâ€™ most popular model in China. In August of this year, Lexus continued to reinforce its products. The new CT 200h, the new NX and LX 570 peak special limited edition models were successively listed, and three models will help Lexus to achieve better results. Among them, the new CT 200h has a stylish and rich configuration and is expected to become the new sales pillar.

As the worldâ€™s largest market for Volvo, Chinaâ€™s August sales increased by 25.9% to 9,616 units. Driven by this, Volvoâ€™s sales growth in the Asia-Pacific region ranks first among major global markets. Volvo sales in the Asia Pacific region reached 12,586 units, an increase of 20.2% over the same period of last year. Volvo's sales in the Chinese market last month reached 9,616 units, an increase of 25.9% compared to the same period last year; cumulative sales from January to August reached 70,797 units, a year-on-year increase of 29.9%. The locally produced XC60, S60L and S90 continue to play a major driving role.

Lincoln's monthly sales in China exceeded 5,000 for the first time

August was a record month for the Lincoln brand. Sales in China exceeded 5,000 for the first time in a single month. The Lincoln brand sold a total of 5,240 vehicles last month, an increase of 105% compared to the same period of last year; cumulative sales from January to August reached 34,494 units, an increase of 94% year-on-year. Lincolnâ€™s MKC was sold the most last month, with a total of 1,818 units sold. The MKZ and the navigator (Navigator) both performed well last month. They sold 992 and 138 vehicles, respectively, with an increase of 108% and 112% respectively.

According to data released by the Dongfeng Motor Group, with the stable performance of the domestic Q50L and QX50, Dongfeng Infiniti sold 2,112 vehicles in the Chinese market in August, compared with 2021 vehicles sold last year. Accumulated sales this year reached 16,943 units, an increase of 6.32% compared to the same period last year. In addition, in addition to upgrading existing products and launching new models, the future Dongfeng Infiniti will also launch a new generation of the QX50, which will be put into production at the Dongfeng Nissan Dalian plant and is expected to be launched in May 2018.

The Acura brand sold 1,373 vehicles in August in China, up 58.2% year-on-year. In the first eight months of this year, Acura's total terminal sales in China were 8,946 vehicles, a surge of 271.4% from the same period last year. Among them, CDX sales in China last month was 1,300 units, and cumulative sales increased from 502 units last year to 8,249 units.

An alkaline pump is a machine that delivers or pressurizes a liquid. It transfers the mechanical energy of the prime mover or other external energy to the liquid, increasing the energy of the liquid.